We're changing the pattern of work sessions from the beginning of next month, so from next week the pattern will be: Sunday afternoons 2 pm - 5 pm; Tuesday morning 10:30-12:30; and Thursday afternoon 2 pm - 5 pm. I just wrote out a new sign for the gate and will get that printed and laminated and put it up on the noticeboard by the gate as soon as possible. 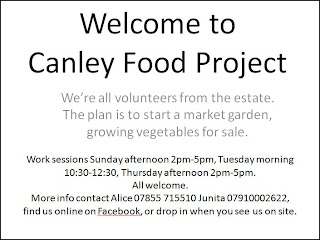 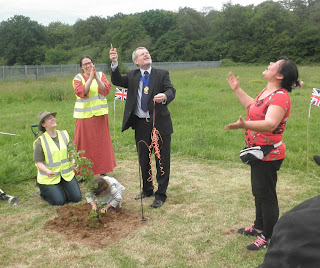 The right worshipful the Deputy Lord Mayor of the City of Coventry Cllr Gary Crookes, and the Deputy Lady Mayoress Mrs Shirley Crookes came along to our Big Opening last weekend. The Deputy Lord Mayor released some balloons to declare the project open and did a ceremonial first planting which local children then helped to water. Over 70 people came along from the estate to enjoy the food and fun and celebrate having got access to the site. 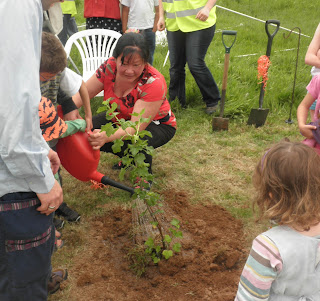 There was a wonderful feast provided by our hard-working team of volunteers, and the Deputy Lady Mayoress drew the raffle and awarded prizes, then cut the celebratory cake. 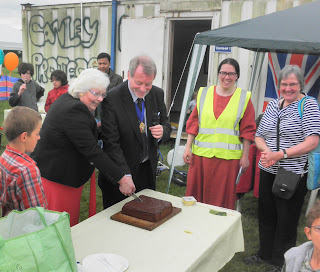 Thanks so much to everyone for coming and making it such a lovely event. Now we get to start work on the plot. We are having work sessions on Sunday afternoons 2-5 pm and Monday and Thursday mornings from 10:30 -1 pm for now, do come along and join in. Next work session includes planting more comfrey root (for making plant food), digging the test bed, and planting seeds. We are aiming to cook and eat a meal together at the close of each work session. All welcome.
Posted by Alice Y. at 00:06 No comments:

We got the keys!

It's an exciting day - we finally got the keys. Just about 26 months of work, no end of setbacks, and finally we passed every test the Council officers could dream up to throw at us and they ran out of excuses not to give us the keys. We are so happy.

Moving things into high gear, with any luck you may be able to see the portable office getting delivered tomorrow; mowing happening the day after that - and

Big Opening! Sunday 10th June, 2:30-5:30.
Deputy Lord Mayor of Coventry at 3:15. All welcome. Cooking activities, free barbeque food, cake, raffle tea, coffee and so on. Come along and help us celebrate this important first milestone.
Posted by Alice Y. at 13:49 No comments:

Things to do in November

THe nights are drawing in and it is feeling like Autumn now. By now all of you with tomatoes and beans should have them all inside. If you have many green tomatoes, placing them on a sunny windowsill with bananas nearby will ripen them in time. A mixture of red and green tomatoes is desirable as this means there is not such a glut. Ripe tomatoes keep best at room temperature in dry conditions - don't put them in the fridge!
There is no shortage of work to be done outside though, particularly with a paucity of daylight. If you are saving seed, collect the dead plants and place somewhere dry away from direct heat. When dried, shake into plastic bags. Depending on the size of the seed a sieve may be necessary. This is for plants which have 'dry' seeds or pods of seeds.
Now is also a good time to get the compost on the ground. It might be too late for some green manures but those which need digging in could still be sown. Cut up the dead plants off the plots to enable decomposition.

Also to all of those with toilet training toddlers - toddler wee is a useful activator for compost.

Next post we shall discuss non-chemical slug prevention.
Posted by FlyingCarrot at 14:32 No comments:

After an exceptionally dry autumn so far it looks like we are getting the wet and more unsettled conditions typical for October.
This means that there are some jobs to do now...

Mow the lawn when dry enough. Hopefully this means it won't need mowing until Febuary.
Any remaining tomato crop needs to be taken in or else risk loss from blight and split skins. Split skins are a particular problem after long periods of drought.
Dead heading flowers that are fading.
Applying biological control for slugs. I intend to use nematodes which can be purchased on line or from garden centres. These attack and kill slug eggs but must be watered in before the first frosts.
Save seed from plants. Plants must be dried first then placed in a bag once dry. Save the seeds in labelled enveloped and keep in a cool, dry place.

Meanwhile I am on the hunt for other blogs and sources which are related to this blog subject so watch this space!
Posted by FlyingCarrot at 14:42 No comments:

Summer in October and a call for photos! 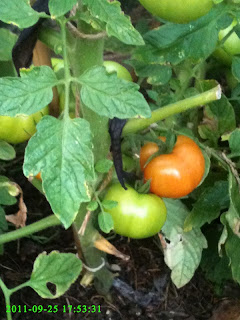 So after a surprisingly long Indian summer it is business as usual. The general warm, dry September followed by the record temperatures (>25C on 30-3-10-11) has caused some unusual behaviour. Spring bulbs are already starting to sprout.

Meanwhile it has been good for the tomatoes of which can be seen here:

It is important to ensure that foliage is pared back to a minimum and sideshoots and flowers removed. We are getting to the region when the nights are <10C or less with a corresponding rise in relative humidity - the best conditions for blight. THis means that potato growers must also check their haulms for the tell tale black stains. If blight is spottted remove the affected parts and either burn or dispose of in unrecycleble waste - composting will spores remain in the solil.

Back to the wierd weather - what do we do about the potential adverse effects of sprouting in October. Some of this will solve itself, particularly for plants which bloom early in the year in that the lower temperatures for the rest of the months coupled with the longer nights will cause the plants to start winter hardening. However it might be worth helping the plants along by ensureing they are well composted and watered. When the first frosts arrive - cover the plants with agricultural fleece or a biodegradable bracken blanket.

Meanwhile I am making seed balls of which more can be seen here
http://en.wikipedia.org/wiki/Seed_ball
Some are from harvested seeds but others will be made prior to sowing. Seed balls have advantages in that by incorporating a paper-strengthened shell and compost in the middle it significantly increases the probability of germination - birds and other animals cannot get at the seeds inside. I have been gathering clay soil and preparing it for modelling first. The size of balls reflect the type of seed and the purporse and are between 10mm - 80mm in diameter. There is no shortage of waste ground to experiment with these!

Finally we really need more photos for this blog as there is a dearth of them here. So please put up photos of your gardens, harvest and yourselves!


Happy harvesting!
Posted by FlyingCarrot at 06:04 No comments:

What to do in your gardens now its the Equinox

Bit of a change compared to previous post but then I am new here! My netname here is FlyingCarrot and have been a long(ish) term member of the Canley Food Project and have been known to turn up to the occasional meeting.

In this post I will be describing what I am doing now that this is the time of year when much is ripening. This year I have grown tomatoes, jerusalem artichokes, broad beans, carrots, red onions, rocket and a selection of herbs. Here is how they have done:

Jerusalem Artichokes - bombproof as always but probably not as productive as last year since there was a delay in putting them in. The drought in March April and also in August may have limited productivity but will not know for certain until November when they can be harvested.

Tomatoes: Plenty of tomatoes but only ripening now. Picking those 'on the turn' and putting them in a bowl somewhere sunny with a banana seems to accelerate ripening. Have been diligent with regular watering and the lack of prolonged wet weather means that they have not suffered from split skins unlike in 2010.

Carrots - second attempt - more of a yield but baby carrots a bit bitter and forked. Soil somewhat stony and watering a problem.

So what now? As it is autumn, we are now clipping off most of the foliage of the tomatoes so that they will ripen. We are also planning next years crops. But what we have to do is ensure that they are still being watered - dont let cooler days and dew fool you! THere should be plenty of organic waste for composting so that by the time harvest is finished we can give the soil some TLC.
Posted by FlyingCarrot at 15:48 1 comment: